One of this week’s themes looked at possible impacts of climate change on the cryosphere.

It has been fascinating to learn more about this system and again a first for me. I have flown over the Greenland ice sheet… after college some friends and I flew to San Fransisco for the start of our two month road trip across America. I distinctly remember flying over Greenland because it was first point in the journey that I actually had the courage to look out of the window – up until then I assumed that if I moved, the plane would tilt… it was my first flight – and a long eleven hour one! It was early March and it was amazing – flying over this mass of snow and ice extending for miles.

I have also passed the Hardangerjøkulen glacier on Europe’s highest mountainous plateau, in Norway. I’d not seen a glacier close up before and was very excited to be able to do this, although the reality was that as I was traveling past on a train I wasn’t exactly sure which part was the glacier…however I would definitely recommend the 7 hour train trip from Oslo to Bergen. 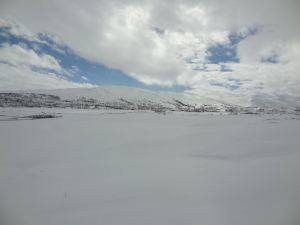 Near the Hardangerjøkulen plateau, Norway

This is why I am really enjoying this course as I am learning about systems that I have seen but knew little about how they work.

We have learnt about the natural occurrences of accumulation and ablation affecting the three ice sheets – Greenland, East Antarctica and West Antarctica and what glaciers are – moving masses of ice – formed by the transformation of snow that has survived at least one summer melt. The dynamics of positive and negative mass balance was explained. Factors contributing to positive mass balance include precipitation. Also temperatures need to be cool enough in summer (where melt occurs naturally) for snow to survive to the following year.

Negative mass balance is affected by surface melting and blocks of ice breaking off, forming icebergs where the glacier meets the sea (calving). Whilst accumulation and ablation are natural events in response to the seasons leading to expansion and retreat (as was demonstrated in the feedback video, similar to breathing in and out) it was suggested that there is evidence (particularly in Greenland) of increased ice flow and spreading. This results in more ice being lost through calving. 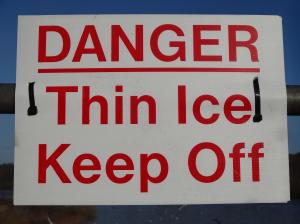 Photo taken in London by John Fung – but you get the picture…!

Other factors resulting in increased ice flow (leading to possible negative mass balance) include basal lubrication (melt water draining to the bed) and the collection of melt water in surface lakes. These lakes are darker than their surroundings and hence have a lower albedo which causes warming. The lakes can suddenly drain causing short lived acceleration through lubrication of the ice sheet flow.

One of the students – Helen Burrell – posted a link showing the Jakobshavn Isbræ glacier in Western Greenland calving up. Whilst it was an amazing sight to watch I also noticed that there was a lot of darker ice. Whether this is a natural occurrence or not, I am not sure but if there are more darker areas appearing on ice sheets this will, I presume, increase ablation through less reflectivity of the sun’s rays.

Coincidently whilst I was in Scandinavia two years ago (this is when I went on the train trip), I stumbled across the Polarbiblioteket at the Arktisk Institut in Copenhagen.  I always take too many photos and this is one I took of a research paper. It is only now that I am appreciating what I took a photo of! 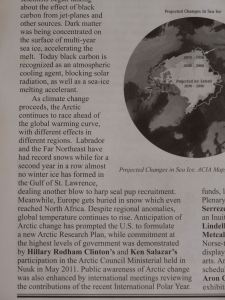 A bit difficult to see and I don’t know who wrote it but it talks about dark matter on multi –  year sea ice!

And here is another interesting related link that was posted this week talking about ‘dark snow’.

Another factor impacting on increasing ice flow is buttressing and this acts as a controlling process. So where the ‘buttress’ is removed (for example by a change in topography or removal of a floating ice shelf) this causes the glacier to flow faster and thus mass loss increases.

It was interesting to learn how glaciers form and their inherent instability and that they are always on the move. I didn’t know that! Here is a good link showing all about glaciers.

It is important to understand that expansion and retreat in the cryoshere (including dramatic calving events) is a natural process. So too was the explanation for the above normal melt extent of the Greenland ice sheet in 2012. This was thought to be caused by a change in high and low air pressure systems in the North Atlantic. The melt extent extended up to 97% of the ice sheet surface and lasted two months longer than the 1979 and 2011 means. Whilst in this instance ‘natural changes’ in the climate system seemed to be at play, it is important to continually monitor the ice sheets to ascertain any changes that may also be exacerbated by climate change. This week it was suggested that Greenland may be nearing a ‘tipping point‘ – if average annual temperature in Greenland increases by 3 degrees – the ice sheet may melt at a rate which means it could become a smaller inland ice sheet.  Certainly the IPCC Climate Change 2013 summary report  suggests that ‘Northern hemisphere spring snow cover will decrease during the 21st century as global mean surface temperature rises. Global glacier volume will further decrease’.

Thanks to Liam’s link from the National Snow and Ice Data Centre which demonstrates the importance of glaciers – as an important source of fresh water in dry seasons (when precipitation is low).

Another important point relating to the relationship between the cryosphere, hydrosphere and rising sea levels is that whilst the loss of floating sea ice does not contribute to rising sea levels, acceleration of glacier (land) ice does impact on levels (along with the major contributor which is thermal expansion of warming oceans). We learnt that loss or substantial retreat of smaller ice caps and mountain glaciers is occurring and thus will contribute to sea level rise. However, figures showing the loss of glacial ice worldwide vary and so it is difficult to ascertain exactly the impact on sea levels (or future impacts). We were directed to a fascinating site – Glacierworks photo exhibits that show changes to glaciers in the Himalayas over the past 91 years.

There is also concern over the instability of the West Antarctic ice sheet resulting in a hypothesis of collapse of the ice sheet which would be particularly relevant for sea level rises. Whilst there is a low (5%) probability of this happening the site demonstrates some of the dynamics involved. For example, Antarctica has many ice shelves that also buttress the ice sheet which can influence ice flow – if these break up the flow rate will increase.

It is clear that ice sheets are affected by natural processes and variations and also by anthropogenic warming. A negative overall mass balance of the cryosphere is compounded by increased air temperature, increased subsurface ocean temperature, increased lubricating melt water, decreased albedo and reduced buttressing. We now are understanding far more about these processes and complexities and interactions of the climate system. This will be ongoing as we try and work out what role climate changes plays in this complex mix.

Again this week has been great. The difficulties have been related to the terminologies and also the sheer wealth of data and information about the cryosphere and possible impact of climate change. The course gives a very good introduction and is naturally constrained by what we can look at each week. The websites are very informative and I will re-visit them to keep learning. At least I now understand more about what was happening at the Hardangerjøkulen glacier!

The end of the journey – Bergen, Norway